Recall alert: Dressers from Target can harm your children

Previous Next
Recall alert: Dressers from Target can harm your children

Target is recalling 180,000 4-drawer dressers from their Room Essentials brand, according to a report from the Consumer Product Safety Commission released on September 13, 2017. The recalled dressers were sold both online and at Target stores across the country. The dressers were described as “unstable if they are not anchored to the wall, posing serious tip-over and entrapment hazards that can result in death or injuries to children.” The CPSC has received 12 reports of the Target dressers tipping or collapsing, including tip-overs onto two 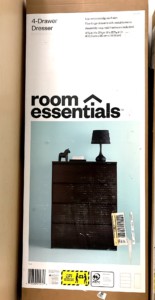 The CPSC has received 12 reports of the Target dressers tipping or collapsing, including tip-overs onto two three-year-old children. If you believe you have this recalled product, call Target at 1800-440-0680 or go to target.com and click on the “Recalls” button at the bottom of the page.

Although no major injuries have been reported yet, these dressers appear to present a hazard similar to IKEA’s MALM dressers, which were also recalled because of their inherently unstable design. In a period of just two years, three toddlers were fatally injured due to MALM dresser tip-overs.

Just recently, Philly.com reported that the IKEA dresser recall is falling short. Safety advocates, including the Consumer Federation of America, assert that IKEA is not doing enough to get the dangerous dressers out of American homes or to highlight the threat they create, especially when located in places accessible to children. As of January of 2017, only 3% of 29 million dressers sold by IKEA had been repaired or returned.

It is now recognized that dressers which fail to meet voluntary industry standards for safety and stability pose a threat to American households, and particularly to children from 2 – 5 years of age. In December of 2016, Attorneys Alan M. Feldman, Daniel J. Mann and Edward S. Goldis of Feldman Shepherd resolved lawsuits brought on behalf of the families of the three young boys who lost their lives as a result of IKEA furniture tip-overs. The cases settled for a payment of $50 Million to the three families, and contributions to childrens’ hospitals and a child safety advocacy organization. IKEA also committed to never again selling furniture that did not meet the recognized standard for tip resistance.

To learn more about furniture tip-over accidents and how to prevent them, click here.