Massive National Recall of Walmart Dressers due to Tip-Over Risk

On Wednesday, September 6th, 2017, the United States Consumer Product Safety Commission (CPSC) announced that Ameriwood Home issued a recall of their Mainstays chests of drawers due to serious tip-over and entrapment hazards. These dressers, sold at Walmart stores all over the country, do not comply with the performance requirements of the U.S. voluntary industry standard, as they are unstable and easily tipped over. The recall is estimated to affect 1.6 million dressers nationwide.

So far, one injury has been reported to the agency involving a four-year-old boy. An Ameriwood dresser tipped over and fell on him, causing an unspecified injury.
Ameriwood is offering a free repair kit with feet for the chests and a device that anchors them to the wall. The company can be reached at 877-222-7460 between 8 a.m. and 5 p.m. CT on weekdays, and online at Ameriwood.com. 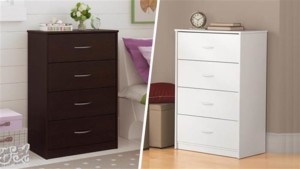 The recall of dangerous Ameriwood dressers mimics the massive recall of the IKEA MALM line of dressers last year after three children were tragically killed as a result of dresser tip-overs. Curren Collas, age 2, was crushed to death by the tip-over of a six-drawer MALM dresser in the bedroom of his home in West Chester, Pennsylvania. Two-year old Camden Ellis was the victim of the tip-over of a three-drawer MALM dresser in the bedroom of his home in Snohomish, Washington. Ted McGee was asphyxiated when a six-drawer MALM dresser toppled over on him in his bedroom in Apple Valley, Minnesota. Like the other boys, Ted was just 2 years of age.

In December of 2016, Feldman Shepherd attorneys Alan M. Feldman, Daniel J. Mann, and Edward S. Goldis secured a $50 million settlement for the families of the three victims, in addition to ensuring that IKEA recall the dressers, increase funding for their “Secure It” campaign to raise awareness of the risk of tip-overs, and donate to hospitals and organizations in memory of the children. Questions persist, however, about the effectiveness of the recall, which has left millions of unstable dressers in American homes.
Unstable dressers that do not meet safety standards pose serious hazards, especially to children. A furniture tip-over can cause devastating injury or death. Learn more about the facts of furniture tip-overs and how you can protect your family.